Dell 829 _ Before I Wake , a photo by uk vintage on Flickr.
Posted by Unknown No comments: Links to this post

Roberto Sebastián Antonio Matta Echaurren (November 11, 1911 – November 23, 2002), better known as Roberto Matta, was one of Chile's best-known painters and a seminal figure in 20th century abstract expressionist and surrealist art.
Born in Santiago, he initially studied architecture at the Pontificia Universidad Católica de Chile in Santiago, but became disillusioned with this occupation and left for Paris in 1933. His travels in Europe and the USA led him to meet artists such as Arshile Gorky, René Magritte, Salvador Dalí, André Breton, and Le Corbusier. Matta was of Spanish, Basque and French descent.
It was Breton who provided the major spur to the Chilean's direction in art, encouraging his work and introducing him to the leading members of the Paris Surrealist movement. Matta produced illustrations and articles for Surrealist journals such as Minotaure. During this period he was introduced to the work of many prominent contemporary European artists, such as Pablo Picasso and Marcel Duchamp. 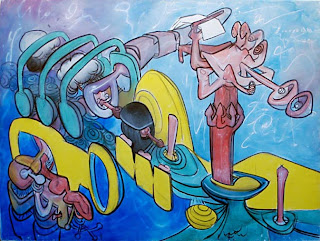